The recent departure of La Gallo Rosso left a hole in the Highlands. The location is an absolute hot spot, and it’s obvious because, well…it didn’t stay vacant for long. Dustin Staggers and his brother Kyle are opening a New Orleans-themed restaurant called Roux at 1325 Bardstown Rd in the Highlands on Friday, October 3, 2014. After hearing reviews from a few attendees at their soft opening Monday and Tuesday, I have no doubt that this will become a Louisville favorite instantly!

You may recognize Dustin from The Monkey Wrench on Barret Ave. He most recently held the executive chef position there, and was responsible for turning their food scene into something great. Staggers visits New Orleans quite frequently and decided that he wants to bring that New Orleans experience to Bardstown Rd. Well, I’m excited! 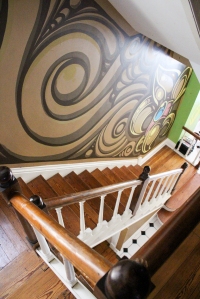 They renovated the historic, Highlands home bringing a nice new patio to the front of the building, and using bright paint colors and hand-painted designs by local artists on the interior. The quaint bar area on the second level has a nice, cozy feel, and no matter where you are inside this place, you will undoubtedly be reminded of New Orleans. From photos to voodoo skulls to beautiful wall sconces that look like gas street lanterns, Roux has geared everything up, including the food, in order to make you think you’re in New Orleans.

Speaking of the food, the menu will speak for itself. Roux will be serving up some cajun favorites like po’ boys served on authentic French bread from a bakery in New Orleans; Gumbo; Jambalaya; Red

Beans and Rice; Blackened Redfish; and BBQ Shrimp, as well as plenty of others. The prices are fabulous. Your most expensive entree is $21 (with the exception of market prices on fish, and certain specials), while the majority of the entrees hover in the mid-teens. The cocktail list looks very intriguing. Of course you’ll find a Sazerac, a hurricane, and other New Orleans favorites on the cocktail menu, but there are a few interesting recipes on the Roux drink list that I have never seen.

I guess my point is this: Roux will be sticking around. This isn’t just another restaurant that has been sloppily put together at the last second with no chance of survival. Roux has been well-planned,  and executed with flare. Plus, with Dustin Staggers and Griffin Paulin as your executive chefs, you can count on eating some incredible meals.

Grand opening weekend for Roux in the Highlands is October 3rd, 2014. Stop in to check it out!

Thinking about moving to Louisville or relocating within Louisville? I would love to speak with you about your next home – 502.509.9278 – justin@metrolouisvillemls.net

View all Louisville are property listings at www.louisvillehomeplace.com