The largest fireworks display in North America kicks off the beginning of the two week party for the two minute horse race every year in Louisville. Thunder Over Louisville, with amazing weather, went off without a hitch over the weekend (April 18th, 2015), and to us local folks it also marks the beginning of the madness we call The Kentucky Derby Festival. With differing local opinions on actually participating in the Kentucky Derby, there is one thing most of us Louisvillians can agree on: the two weeks leading up to the greatest two minutes in sports at the world’s most legendary racetrack is fun no matter who you are. My goal is to give you a list of the best Kentucky Derby Festival events to attend whether you live here, or you’re just in town for the ride. This is The Local’s Guide to Kentucky Derby Festival.

Who doesn’t like delicious food? Louisville has so much delicious food, it receives national attention. For that reason alone, you should know that anything around town with the words, “Taste of” in it will be awesome. The Taste of Derby Festival includes a bourbon tasting, a wine tasting, a Bloody Mary contest, a silent auction, and samplings from some of the finest restaurants in Louisville! All proceeds go to Dare to Care Food Bank.

Do you like running? If you’re like me the answer is no, but that doesn’t keep me from heading down to the Derby Marathon / Mini-Marathon to cheer on the crazy people that do love to run. Each year this is one of the most anticipated events of Kentucky Derby Festival. As a Boston qualifier, the turnout for this race is amazing, and there are plenty of volunteer opportunities if you want to work the sidelines as well. The evening of the Marathon and Mini-Marathon is the Mini Fun Run, allowing kids to participate in a similar fitness event. In addition to the fun run, there’s also an obstacle course!

Another fitness event is the Tour De Lou, a scenic bicycling event for those who prefer wheels to feet. With two different distances, this event is geared for cyclists of all experience levels, and it’s a great way for you to see some of the sweetest spots in Louisville: from Shawnee, Iroquois, and Cherokee Parks, to Downtown, Churchill Downs, and the Highlands, you will love this Kentucky Derby Festival Event!

If you prefer eating brunch on the river rather than riding your bike or running, this Derby Fest event is for you. Tour the historic Farnsley-Moremen Landing, a beautiful 19th century riverside farm, and eat a delicious, festive brunch while listening to the smooth sounds of live riverboat jazz. This brunch showcases the Ohio River as well as some of Louisville’s history. You can also take a horse-drawn carriage ride!

If the title sounds silly it’s because the event is pretty silly, but it’s one of the most popular Kentucky Derby Festival events you can attend! Gather together with thousands of other people and watch as teams of five compete by maneuvering a team-built “bed on wheels” through a racecourse at Broadbent Arena. Many different prizes are given, and there’s actually an official tailgate party before the event!

BATTLE OF THE BOUNCE

A human hamster ball and an obstacle course? Yep. Held on the Great Lawn, aka Fest-A-Ville, the Battle of the Bounce  is a blast every year. The competition has a rock wall, a bouncy obstacle course, a human hamster ball, and a bouncy horse race all combined into one crazy relay race.  Live commentary comes from local radio personalities, and food and drink stations are open as well, so there’s lots to do!

One of the most well-known and longest running Kentucky Derby Festival Events is the Great Steamboat Race. Stand along the banks of the Ohio River to watch as our own Belle of Louisville battles the Belle of Cincinnati in this steamboat race to complete a series of tasks. For this event you can also be a part of the action by purchasing a ticket to board one of the two vessels for the race. With full access to food and drink at Fest-a-ville, you will not want to leave the Great Lawn all day!

Stay on the Great Lawn after the steamboats finish and head on over to the Overlook at Fest-a-ville for Beer Fest. This Kentucky Derby Festival event is for the craft beer enthusiast. Sample special brews from over 30 different local, regional, and national breweries! 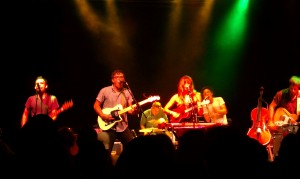 Kroger’s Fest-a-ville is rocking daily beginning Thursday, April 23rd through Oaks Day, May 1st. From 11:00 am to 11:00 pm you can enjoy great food, solid beverages, and live music from local, regional, and even national recording artists like Blues Traveler and A Lion Named Roar. This is the place to be pretty much any day of the week, so make sure you check out the full schedule of bands.

You can see all Kentucky Derby Festival events by visiting http://www.kdf.org. You may as well learn how we do things for Derby here in Louisville, so check out all the favorites!

Thinking about moving to Louisville or relocating within Louisville? I would love to speak with you about your next home. 502-509-9278 – justin@metrolouisvillemls.net

You can view all Louisville homes for sale at www.louisvillehomeplace.com

View homes for sale in the go with my mobile app!