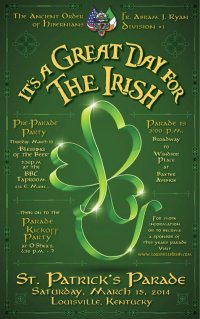 place on Saturday, March 15th, 2014. Per usual fashion, the parade route begins at Baxter Ave and Broadway, travels through the Original Highlands, and ends at Windsor Ave. The theme for 2014: “It’s Great Day for the Irish!”

The St Patrick’s Parade kicks off around 3:00 pm and includes floats from all sorts of local businesses. Each participant comes up with their best float design, keeping in mind the the theme for the year. There are costumes, candy, and all sorts of Highlands fun for all ages.  This is Louisville’s best St Patrick’s Day event! The St Patrick’s Parade route is rather long, giving you a variety of choices for where to setup camp. Some people like to change locations and move with the parade. The choice is yours, but keep in mind that you won’t be the only people there. Last year there were well over 50,000 people in attendance, and if the weather is as nice this year, you can count on another large turnout.

This event always seems to get everyone fired up for springtime, and let’s be honest, after this winter we could all use a little springtime! The Highlands as a neighborhood, and the city of Louisville as a whole really rally around this Spring kickoff event! The St Patrick’s Parade is one of our first opportunities to get out of the house after being snowed in for so long. Keep in mind that certain areas are better then others for strollers and bikes, so get there early.

Whether you’re Irish or not, the Ancient Order of Hiberniens invites you to be Irish for the day at the 41st annual Louisville St Patrick’s Parade in the Highlands on Saturday, March 15th, 2014 !

Thinking about moving to Louisville? I would love to speak with you about your move – 502.509.9278 – justin@metrolouisvillemls.net

Just want to look around a bit? View Louisville Homes for Sale